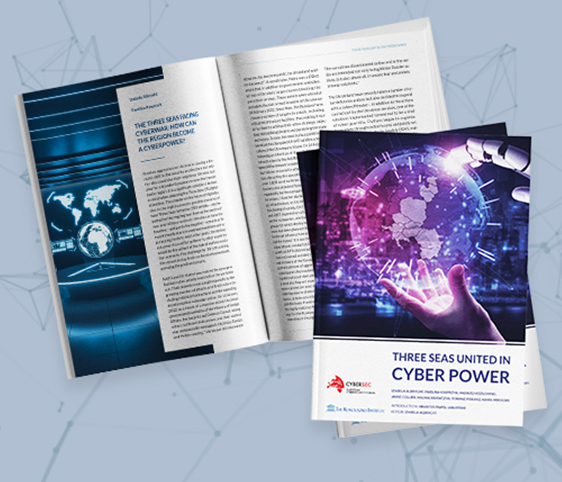 We invite you to read the special report “Three Seas United in Cyberpower”, which focuses, among other things, on the direction of security-oriented cooperation and the future of digitalization in the 3Seas region. The partners of the report are Google and BGK.

One of the most important conferences of the year – World Economic Forum – started in Davos. The event touches upon important and current topics, so the issue of cooperation in the area of security in the 3Seas region could not be missing.
This is discussed in the report presented at the Three Seas House by Izabela Albrycht, the Chair of the Program Committee of CYBERSEC – Three Seas united in cyberspace.

According to the conclusions of the document, the region can become a global technological hub, but it needs to invest even more in groundbreaking technologies, develop digital infrastructure projects and build cybersecurity.

In 2018, think tanks from Central and Eastern Europe called for a cyber-modernization of the Trilateral Initiative to make it “future-ready” and “future-proof,” – said Izabela Albrycht, Chair of the CYBERSEC Programme Committee.

This 2018 call has not lost its relevance, on the contrary. With Russia’s aggression against Ukraine and geopolitical changes, it has become clear that we need to give new impetus to security-oriented cooperation in the region.

Today, security is the common denominator for the main areas of cooperation of the 3Seas countries: digital, energy, transport – emphasized Deputy Minister Paweł Jabłoński inaugurating the discussion in the 3Seas pavilion in Davos.

Together, countries in the region face many similar challenges, including cyber threats. This shared threat landscape creates fertile ground for further building regional cybersecurity cooperation. – The 3Seas region must be united in cyberspace. And by cyberspace I mean not only developing the area of cybersecurity, but also joint work in innovation, digitization and building technological advantages – Izabela Albrycht emphasized.

This was confirmed by Royal Hansen, Vice President of Google, who noted that investments in modern technologies help some, but investments in cyber security help practically all sectors of the economy.

The current situation highlighted the need for joint action, showed its strength. – Close cooperation of the 3Seas is fundamental for cyber security of every country in the region – said Paweł Nierada, Vice President of BGK.

Izabela Albrycht noted that – such activities are much simpler, because the countries of Central and Eastern Europe have a vibrant and innovative cyber security sector, which can successfully form one of the pillars of security in the modern world. The sector is developing, among others, thanks to the activities carried out within the framework of the European Union and the NATO Defence Innovation Accelerator for the North Atlantic (DIANA).

What is the theme of the report?