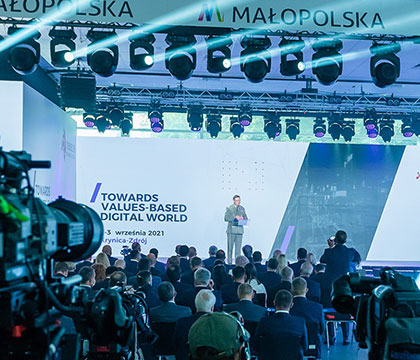 Behind us is one of the most influential conferences in Europe in the field of cybersecurity and new technologies – CYBERSEC CEE Regions & Cities 2021. During the three days filled with over 60 different formats involving more than 200 experts from Poland and abroad, we managed to make another step towards a digital world based on values. The event in Krynica-Zdrój was attended, among others, by the President of the Republic of Poland – Andrzej Duda. According to the official media report we reached 18 million people with information about CYBERSEC.

During the 14th edition of the event under the CYBERSEC brand, in order to fully capture the broad spectrum of threats and opportunities facing us, we decided to focus on four areas: digital spaces, digital 3Seas, cybersecurity of local government, and finally – within the Krynica Goes Digital thematic path – on a number of the most current economic, legal and social issues, so crucial for the development of Europe.

This year’s CYBERSEC was honored with the presence of the President of the Republic of Poland, Andrzej Duda. In addition to giving a speech on the importance of cooperation in the field of cybersecurity, the President of Poland met with rectors of universities and representatives of ICT companies.

Towards values-based digital world – together
In Krynica, we were able to create a platform for an open, powerful discussion aimed at developing strategic visions and forming a coalition for the value-based transformation of tomorrow. As many of you emphasized, nothing could be achieved without cooperation. However, members of all communities and institutions, organizations such as NATO and the EU, our regions, states and cities, and finally – each of us – must participate in this process. To quote one of our guests, Secretary of State for Digitalization – Janusz Cieszynski: “It is not the systems, but the people that are most important in cyber security”.

CYBERSEC community grows stronger
At this year’s Krynica edition of the event we gathered even more decision makers, experts and industry leaders to make a real difference in both the digital ecosystem and the analog world.  We are happy to see more and more of us!  The mission to promote an inclusive, innovative and supportive digital environment will surely be a great success, thanks to the accumulated knowledge and experience of all the guests and participants of our CYBERSEC branded events.

We are also grateful to the Conference Partners: leading companies from our region and other parts of the world. Innovations, solutions and tools, some of which were presented and discussed at CYBERSEC, will certainly have a huge impact on our common digital world.

Key panels of CSRC21 and the CYBERSEC award
The conference was opened by Izabela Albrycht, Chair of the CYBERSEC Programme Committee, introducing the conference theme – “Towards values-based digital world”. This slogan marks our commitment to the protection of human rights, the rule of law and respect for democratic principles in cyberspace.

During the two days of the conference we discussed many important topics such as key projects in 3Seas Region, which should now be jointly implemented under the Smart Connectivity plan or the analysis of the possible impact of the European Green Deal on agriculture in Europe, especially in Poland.

One of the most important formats of CYBERSEC was the inauguration of the Polish Gaia-X Hub.  The project is developed by the Polish Chamber of Information Technology and Telecommunications and ZIPSEE Cyfrowa Polska. GAIA-X aims to make data infrastructure even more transparent and interoperable by connecting network and connectivity providers, cloud solutions (CSPs), high performance computing (HPC), as well as sector-specific cloud and edge systems

During CSRC21, we hosted a number of panels organized together with the Main Institutional Partner – Malopolska Region. One of them was the debate “Małopolska of the 21st century. Space technologies as an opportunity for a leap forward for the region”, during which an interesting discussion arose on the progress made in the past few years and the future of the region and its space technology sector.

During the panel titled “Open RAN: Securing the Future of 5G in the Three Seas Region”, a fruitful exchange took place in which our experts debated the further development of the Open RAN architecture, the prospects for its implementation and security.

The panel discussion titled. “Cyber Made in Three Seas – The Region’s Technology Potential for Secure Digital Transformation” meanwhile, signaled ways to combat the region’s skills gap, bring more cybersecurity professionals to the CEE region, and the solutions that governments need to implement.

This year’s CYBERSEC award at the official gala was presented to Brig. Gen. Karol Molenda, Director of the National Cybersecurity Center, for his achievements in building the national cybersecurity system and for his role in creating the Cyberspace Defense Forces in Poland.

Media success – CYBERSEC in numbers
During the promotional period of the last conference, i.e. August-September, a total of about 2,764 mentions of the CYBERSEC CEE Regions & Cities conference were published. There were 1,658 digital mentions, 178 in the press, 243 on the radio and 152 on television. The media equivalent is worth a total of about 4-4.5 million PLN (AVE). The estimated total reach of the message was about 17 million.

In our social media channels (Twitter, LinkedIn and Facebook) there were 540 publications with a reach of over one million impressions. Digital equivalent exceeded 1,6 million PLN.

We encourage you to watch video materials from the CYBERSEC CEE Regions & Cities conference in Krynica-Zdrój. On the playlist you will find recordings of all panels. Let’s experience it once again!

Thank you for your presence and involvement!

See you at the next CYBERSEC conference, which will take place in the first half of 2022.