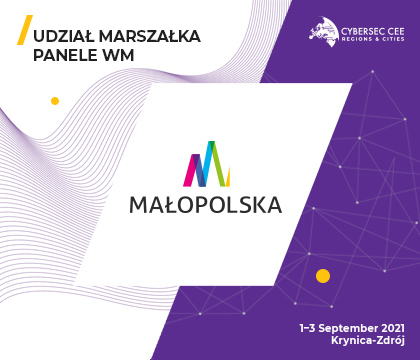 Malopolska Voivodeship is the Institutional Main Partner of the upcoming CYBERSEC event. During the September conference in Krynica-Zdrój we will host among others Mr. Marshal Witold Kozłowski, and co-organize four thematic panels.

In 2005-2006 he was the Chairman of the Regional Assembly of the Małopolska Voivodeship, while in 1999-2018 he served as Secretary of the Nowosądeckie County. In 2018 he was the President of the Board of the Regional Fund for Environmental Protection and Water Management in Cracow.

During Cybersec CEE Regions & Cities, he will speak on several panel discussions and also address the opening of the event as one of the hosts.

The Marshal will participate as a host in the discussion on the panel “BUILDING THE CAPACITY OF CIRCULATION OF LOCAL GOVERNMENTS”, as well as on one of the thematic panels below, “MALOPOLSKIE ANTI-CRISIS TARKS”, which is co-organized by the Malopolska Voivodeship.

EUROPEAN GREEN DEAL – GOALS AND CHALLENGES; HOW TO INCLUDE THEM IN THE REGIONAL CLIMATE POLICY? | 2 September, 10.00-11.00 | NOWY DOM ZDROJOWY

Climate change and environmental degradation have become one of the most important global challenges at the beginning of the 21st century. The European Green Deal aims to transform the EU into a modern, resource-efficient and competitive economy. However, the actual implementation of the program involves a number of challenges and modifications to existing policies. During the panel, experts will analyze key goals and confessions of this program and present possible visions for its implementation.

The idea of the Just Transition Fund, as articulated by Frans Timmermans, is to show solidarity with the most affected regions in Europe, such as the mining regions, so that the Green Deal gains widespread support and has a chance to become a reality. Due to its economic structure, Poland is a country that pays special attention to the proper implementation of this program. During the panel experts will analyze, among other things, whether the Just Transition Fund will be a real tool supporting such countries as Poland?

Małopolska is one of the most attractive regions in Poland for initiatives in the space technology sector. The creation of the European Space Agency incubator and the Space Technology Center at the AGH University of Science and Technology attest both to the interest of Małopolska’s entities in space technologies and the development of know-how and the necessary business environment. What is the future of industry and space technology in the former capital of Poland? What opportunities are there for Małopolska?

Presentation of the effects of particular packages, with discussion of exemplary practical elements of implementation. Presentation of the basic elements of the MTA Education Package, from retrofitting schools with basic computer equipment to taking up the challenge of changing the teaching model and creating the Digital Teaching Laboratory, developing and disseminating new methods, tools, preparing the teaching staff. Digital challenges for massive, assumedly rapid support mechanisms.

More information about the individual panels can be found here: AGENDA.

See you September 1-3 in the heart of Małopolska!